Leo’s company invited us to a West Point football game in New York a few weeks back and we stayed in Manhattan at the Omni Berkshire. I’d always thought that I wouldn’t like NYC because I don’t love big cities after living in Chicago for 7 years, but I was mistaken. I adored New York City. Everything about it had me dreaming of moving there right away.

After meeting Leo outside of the city when I flew on Thursday night, we took an early morning cab into Manhattan. Coming into the city, I had the same butterflies I have when I see the skyline in Chicago. A curious excitement. As we drove, I couldn’t take my eyes off all the little shops, the traffic, the people, the clothes, the energy of such a huge city. Hour 1 in NYC = hooked.

After checking into the gorgeous hotel, we only had a few hours before we had to start getting ready for dinner with the company. Never the one to shy away from touristy things, we hopped on a bus to drive around and see as much as humanly possible in three hours. It rained a ton, but there we sat on the top of an outdoor double-decker bus and took everything in. Seeing the neighborhoods fly by just made me more excited for my next trip! We will be exploring a few select neighborhoods next time instead of trying to see everything.

We had dinner at Carmine’s, and then grabbed drinks at the hotel before calling it a night. Had to be up early the next morning for some football! We drove out to West Point on a coach bus with Leo’s company and napped most of the ride up, but the view we woke up to was incredible. That campus is a stunner. The game was great, hanging out with Leo’s company and meeting all the folks I’ve heard so much about was great. Everything was great! 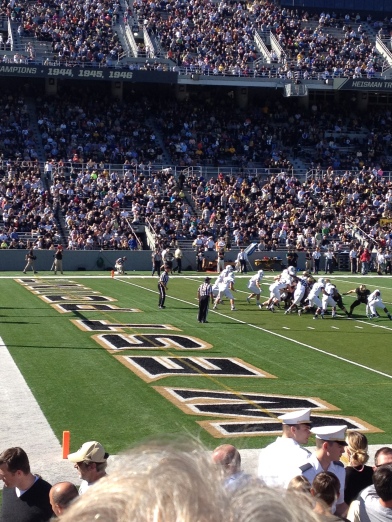 I can’t wait until our next trip to NYC, which I imagine will be upon us in the next year. We spent Saturday night on the lower east side, and then headed back that way for Sunday brunch before I hopped on a plane home. Leo had a few more days of work in Connecticut, which gave me plenty to time to dream about living in that glorious city before we settle down. I’ll be back soon, NYC, and missing you until that time!

Recent Updates from the Land of Love

Good days start with great jeans. All the evidence you need, found here.

Our life on the family farm!

written on a whim
anordinarywoman

A mix of interior, design, food, fashion, travel, architecture. I hope you'll find things that inspire you & thus want to come back for a visit again...& again 😊

A queen\'s guide to an extraordinary life

and everything in between